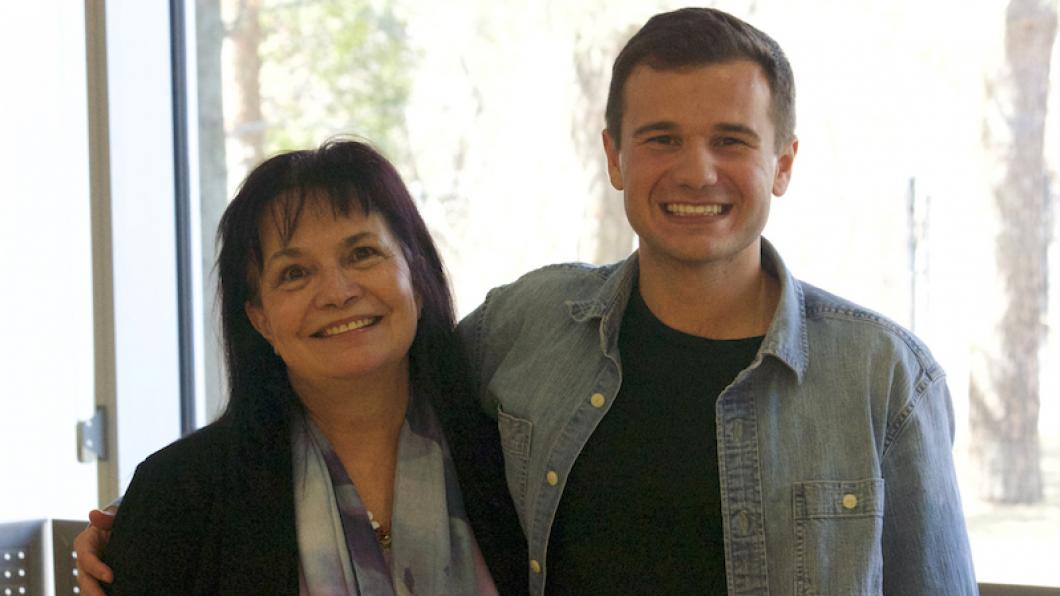 He spent his life hiding his disability. No more

Growing up, Tyler Tompsett's days were spent trying to hide his stutter.

The University of Toronto student (above right) took over a decade of fluency therapy, which involved slowing his speech or changing his breathing in a bid to prevent getting stuck on word or sound repetitions or being blocked from saying a sound. It worked well in therapy, but not in the real world. "Talking slowly in speech therapy doesn't match the fast-paced way everyone else speaks in society," says Tyler, who just completed a six-month placement for his master's in Social Work at Holland Bloorview. His supervisor was Barbara Fishbein Germon. Tyler's breakthrough came a year ago when he began a new therapy focused on acceptance. We spoke about how his experiences enable him to relate to teens with other types of disabilities.

BLOOM: What drew you to the field of social work?

Tyler Tompsett: The fact that I could provide so many different levels of support and be that caring person who people can turn to and talk to when they're in need of help. I'm in the children and family stream at U of T and I'd definitely like to work with children and families.

BLOOM: Did your experiences with stuttering help you identify with some of the issues our clients face?

Tyler Tompsett: 1,000 per cent yes. I know what it's like when someone makes fun of you for having a disability. Everyone tries to cover up their disability, and I always tell youth that disclosing it and being open about it is the way to go. You're going to meet some jerks, but you're also going to meet a lot of nice people who are understanding and accepting. If you tell someone: 'Hey, I have cerebral palsy and this is how I walk,' or 'I have to use a walker and this is how I get around,' it clears up any confusion. Many kids will say 'Okay, cool.'

There's still a huge lack of general awareness of disabilities. For example, I'm always surprised when I introduce myself as a person who stutters in a Starbucks, and the person says 'What's a stutter? Oh, I thought you were joking.' It amazes me how people in customer service jobs don't get this information about disabilities in their basic training.

BLOOM: What did you most enjoy during your placement here?

BLOOM: What was most challenging?

Tyler Tompsett: Trying to navigate different resources for families. Especially when clients are transitioning to adulthood, there's no clear path or one place to go to that connects them with resources, including financial resources. In childhood, Holland Bloorview acts as a hub with multiple services and resources, but when you become an adult, there's no similar hub. Trying to find a doctor who knows about these diagnoses and has experience working with these populations is a barrier too.

BLOOM: What is stuttering?

Tyler Tompsett: It's a speech and language communication disorder caused by a neurological condition where one side of the brain is overactivated and causes disruptions in your regular speech patterns.

BLOOM: I think a lot of people don't realize that speaking is a physical activity like walking.

Tyler Tompsett: I always know what I want to say, but sometimes I'm physically unable to coordinate the movement to say it.

BLOOM: How did stuttering impact you growing up?

Tyler Tompsett: Oh my goodness. I would say, honestly, lots. Mostly in my teen years when you're meeting tons of new people in high school and then in post-secondary. I'd go to meet someone and say my name and have a block. People would make jokes: 'Did you forget your name?' I had so much fear of meeting new people or of talking on the phone. Often I'd stutter and people would hang up.

BLOOM: You said you've completely changed your approach to stuttering recently. Can you explain?

Tyler Tompsett: I watched a TedTalk on a guy called Richard Holmes who stuttered and became a speech-language pathologist. His approach focused on accepting your stuttering, rather than trying to prevent it. The more you think about trying to hide it, the more nervous you get, and the more that impacts your speech.

I've noticed the most drastic improvement by being open about my stutter and telling myself it's okay to stutter. So initially, you stutter more, because you're allowing yourself to stutter. Over time you become desensitized to it. You're able to get rid of a lot of the avoidance behaviours you developed. For example, I used to look away from the listener when I stuttered, and I'd apologize for my speech. Now I can maintain eye contact. You become okay with being a person who stutters and you know there's no shame in it.

Whenever I meet someone, whether I'm meeting them for the first time, or I'm doing a job interview, I disclose that 'I'm a person who stutters.' That makes me feel so much more at ease because I'm letting them know that this is how I speak.

BLOOM: Do you have any suggestions on how we could improve our student training?

Tyler Tompsett: I love Holland Bloorview and I think it's amazing. One thing I was surprised about was that there wasn't a general presentation for students on what is a disability, what are different types of disabilities, and how do you treat people with a disability? We did an orientation to the hospital and what we'll be doing here and our role. But it surprised me that there was no presentation on disability, what you may encounter, and how to work with people with different kinds of disabilities. Many students don't have experience. It would be great to have a general overview, and perhaps a guest speaker who is a youth ambassador.

BLOOM: Is there anything we could do to improve care?

Tyler Tompsett: I do wish that we could offer more long-term supportive counselling. That's when you see the most results. I wish we could allocate more dollars to that.

Stuttering is Cool: A Guide to Stuttering in a Fast-Talking World is a fabulous comic book that was written by former Holland Bloorview staff member Daniele Rossi. I Talk Like a River is a new children's book about stuttering that is winning awards. Watch this video with the author and illustrator.