The legacy of Dr. Hugh MacMillan

Growing up in Toronto, Hugh MacMillan was an all-star athlete. He won numerous awards such as the Nesbitt Gold Medal 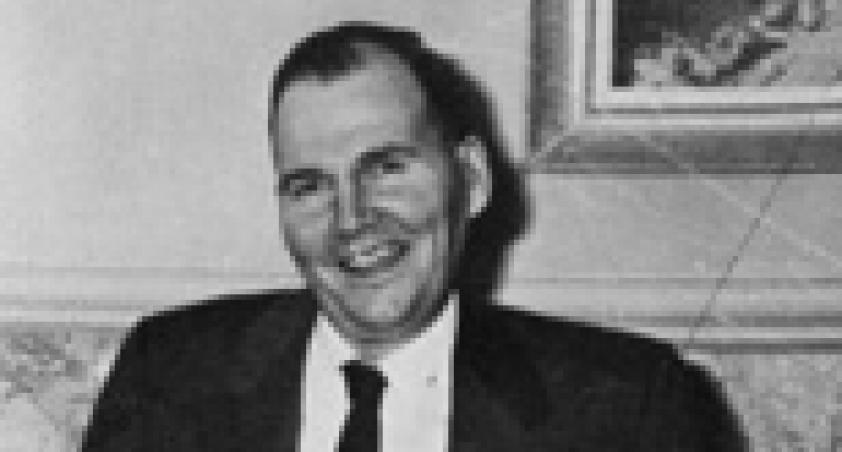 Growing up in Toronto

After studying medicine, marrying his sweetheart, Marjorie Stronach of Montreal, he moved to Albany, New York where he was the Assistant Professor of Bacteriology and Pathology at the Albany Medical School. In 1947, Marjorie gave birth to their first child, Hugh. Two years later their daughter Nancy was born. Once the family was settled they adopted a daughter, Joan, in 1956.

In 1950, Marjorie fell ill with polio. Hugh visited her everyday in the hospital. One day in late October, Hugh did not make his routine visit because he was in the same hospital, also sick with polio. This was a time when there was no effective vaccine for polio, but remarkably, Marjorie made a full recovery.

Within hours, the man who had been such a great athlete was paralyzed in his arms, legs and respiratory muscles. Hugh was in such bad health, he needed an iron lung respirator to keep him alive.

Hugh could not move a muscle below his neck. It took eight months of intense daily exercise and a positive attitude before he regained enough strength to make weekend visits home. Sixteen months after Hugh got polio, he could manage 10 to 15 minutes of breathing on his own.

The MacMillan family returned home to Toronto in May 1952. With a little creativity and making the most of what he had left, Hugh was determined to live a “normal” life.

Hugh and Marjorie modified their home to make it accessible. He had a tilting bed with an electric motor that created a back and forth motion to help his respiratory muscles to breathe. A chest respirator was also kept in the bedroom. A steel beam was installed above the bed with a traveling hoist to lift him into his wheelchair. A gas engine in the garage was fixed to come on automatically and run all of his equipment if the electric power failed.

“When man has one skill cut off, he can look for alternatives,” Hugh said one day. That’s exactly what Hugh did.

Hugh and Marjorie figured out a way to enable Hugh to breathe without the assistance of a respirator. They figured that pushing a pillow down against the small of his back in the wheelchair and having Hugh rock slowly back and forth would raise the front of his ribs and the diaphragm would raise and lower enough to actually help him breathe.

Hugh was always independent and searched for creative ways to do things himself, even with his disability. He started to feed himself after he gained some movement in a few fingers. He attached a fork to one finger and his arm lay on a special armrest. Using a rocking motion, he was able to carry his fork to the food and the motion carried the fork back to his mouth.

Playing cards was a challenge. Hugh always had to rely on someone to hold his cards for him. He had a simplistic idea of grabbing a long piece of wood and cutting a slot in it that would be long enough to hold the cards. Then he labeled the slots 1-13 so when he wanted a card to be played, he would get a person to throw out the card, corresponding to the slot number.

His return to practicing medicine

As Hugh’s health improved, he opened up a small insurance agency that enabled him to work from home. His true passion though, was in medicine.

Shortly thereafter, he helped out at Sunnybrook Hospital and read out cardiograms. It wasn’t long until the Ontario Crippled Children’s Centre opened in 1962 and Hugh was appointed as assistant administrator for the centre, with the hospital section as his specialty.

The children there felt comfortable with Hugh. Parents knew Dr. MacMillan could relate to their children since he knew what they were going through. The Ontario Crippled Children’s Centre became Hugh’s life. His goal was to teach children to look after their personal needs and to take their place in society.

Hugh used to get a laugh out of the shock people got when they met him for the first time. No one could tell from simply talking on the phone with him that he had a disability. An Assistant Nursing Supervisor at that time said, “We never thought of him as handicapped, so we’d never think to warn anybody.”

Hugh’s disabilities never came in the way of work. His good friends worked with Hugh to develop one of the first ever push-button panels for the telephone so he could dial out. Since Dr. MacMillan's disability prevented him from holding a pen, a friend designed and wielded a stamp to use as his signature pad.

In 1963, Hugh began to get weak and lose his energy. In early December 1964, Hugh was taken back to the hospital and placed back on the iron lung device he worked so hard to escape from. “Life is the development of what you have, with an acceptance of the things you cannot change.” he said.