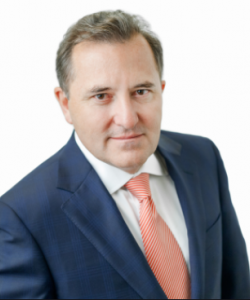 Neil Selfe is the founder, CEO and managing principal of INFOR Financial Group Inc., Canada's leading independent merchant banking and advisory firm. From 2006 to 2015, Neil was Managing Director and Head of Financial Institutions, Structured Products, Technology and Communications Investment Banking at a leading international investment bank. Before that, Neil co-founded and served as managing partner of Diversified Global Asset Management, a multi-billion dollar hedge fund platform, which is now part of The Carlyle Group. Prior to that, he was Global Co-head of RBC’s Technology, Media and Telecom team. Neil started his career in accounting and law with Deloitte, and Osler, Hoskin and Harcourt, respectively.

Neil is deeply involved in the community and, as the father of four children, devotes much of his time to coaching various sports teams. He is a former board member of the CAMH Foundation and the Empire Club of Canada. Currently, Neil serves on the board of several entrepreneurial companies and investment funds.

Neil joined the Board of Directors of Holland Bloorview Kids Rehabilitation Foundation in 2012. He was cross-appointed to the Hospital Board of Trustees on June 2021.