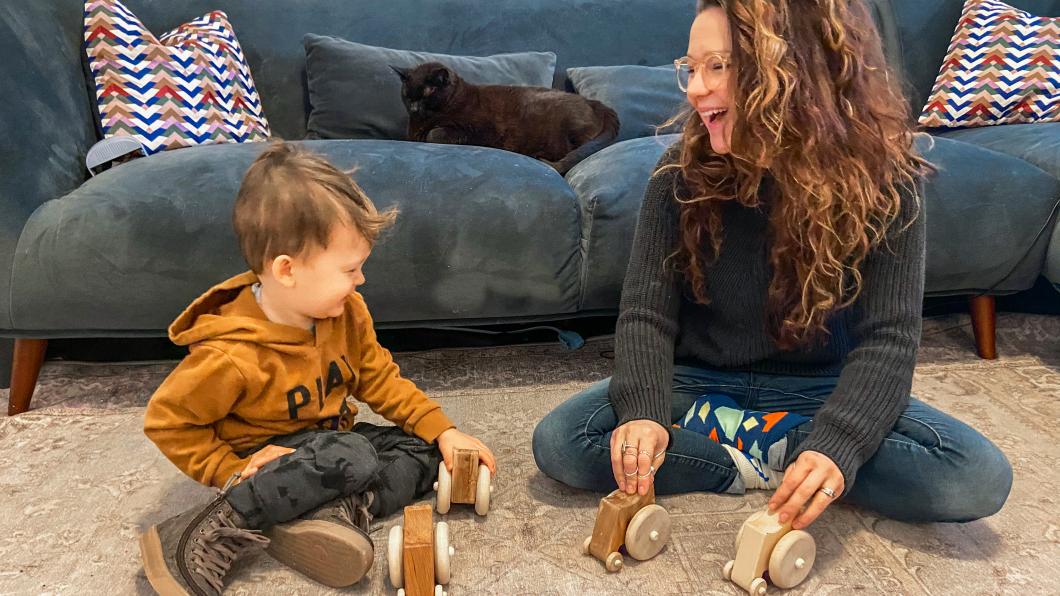 For this mom, disability pride starts in the toybox

Amy Lockwood is on a mission to get kids everywhere playing with her wooden wheelchairs. Made of toy-safe hardwood, including white oak or maple, the Toronto resident describes them as "The classic wooden push car reimagined as a sleek, modern wheelchair toy." There are no push handles on the toys, an intentional choice to symbolize a person's agency over their movement. Amy launched her toy company Lockwood last November, often selling out on a daily basis. Last week they went to customers in three different countries. The wheelchairs are for children of any age or ability.

BLOOM: Why did you decide to make inclusive toys?

Amy Lockwood: I feel like the decision was made for me. When I started playing around with woodworking this summer I was making planter boxes, but I found it really hard on my body. I've had a lifetime of unexplained medical issues. I decided to make something smaller, and thought of making toys for my son Roger. I wanted a wheelchair toy for him that was appropriate for his age and development, but I couldn't find any that weren't made of plastic or had small parts. He just turned three. I did a quick search of wooden wheelchair toys to see if I could rip off someone else’s design, and was shocked to find that there wasn’t anything—nothing. With my new woodworking skills and power tools, I had this overwhelming feeling of 'Oh no, they don’t exist. I guess I’ve got to make them!'

BLOOM: Does Roger use a wheelchair?

Amy Lockwood: No, he doesn't at the moment. He has a rare genetic connective tissue disorder. He has specific genetic mutations that have never been seen in another person before—except in me—which is pretty wild. His symptoms are much more severe than mine. He wears ankle-foot orthoses because he's super bendy. All his joints bend forwards and backwards. For a long time, we weren't sure if he would walk, because he didn't have a diagnosis. We were preparing him to understand that mobility aids could be a part of his future, and they could still be. But he's running now.

I grew up working in and around the disability community. Before having my son I worked with kiddos with non-verbal autism teaching IBI and ABA therapy. I was actually a support worker to a child on the spectrum who went to Spiral Garden camp for two summers in a row. We didn't expect to have a child with a disability, but maybe the universe saw that we were the most qualified parents to get him.

My son had symptoms from the get-go, and while investigating him, our brilliant geneticist started asking more questions about me, and I got the diagnosis of Ehlers-Danlos syndrome. I have the same mutations as my son, but he doesn't have EDS, so we're in this grey area where no one knows what we have. EDS is the box I most fit in and is how I'm accessing services for myself.

I trained and worked for years as an actor in New York, and when I came back to Canada I decided to do a post-graduate degree in children's media. I focused on disability representation in Canadian children's television and content and then I worked for years in kids' TV. I was always advocating for better representation of people with disabilities and being met with hesitation and an insistence that it would not be profitable.

During this pandemic, when it was just me and my family and my power tools, I thought this is something I can do to contribute a bit to representation in children's worlds.

BLOOM: How are your toys different from others on the market?

I also wanted the wheelchair to be the focus and entirety of the toy because I thought if we normalize the mobility aid, then if kids have been interacting with the toy at home, when they see a wheelchair user, the wheelchair will blend into the background and they can see the person in it.

BLOOM: What messages about disability do you hope your toys convey?

Amy Lockwood: I hope that by better reflecting the world around children, people with disabilities will be less invisible. I really like having diverse toys and toys from different cultures. We’re a white family, but by only having white toys we’re telling our son that those are the people that matter. In the same way, by only having inaccessible toys, we're saying people with disabilities are so rare, they don’t even deserve a thought. No one has really been exploring that in the toy world.

I want all children to have access to this toy so they can have a frame of reference. I'm excited that this toy is being used as a tool for conversation between parents and children. Often I find my son becomes the tool—he becomes the prop within a conversation—and that's not his responsibility and it's not mine either. It's the parents' responsibility. My toy is equal parts a teaching tool, and a fun wheeled toy, and a piece of inclusive decor.

BLOOM: Have you always worked with wood?

Amy Lockwood: Never, it's completely new. I've always been a crafter. But ever since I had my son, my symptoms are more pronounced. I have the most issues with my hands. That's where I really struggle. I wear braces on most of my finger joints. My thumbs constantly dislocate when I scroll on a phone. I used to be a big knitter, but I can't knit anymore.

When I started using power tools I realized I can grip this large thing with a big button that’s really easy to push, and have so much power and precision that I don’t have with my own hands anymore. I love that feeling of being able to create things and create them so quickly and efficiently with these hands that I thought couldn’t do that anymore. I needed to come up with a design that I could make mass quantities of without hurting my hands. I rented a basement space at The Workaround at Danforth and Woodbine. This was pre-pandemic. My son was sick and had a lot of appointments, so we couldn't afford full-time daycare, but The Workaround gave me the option of a drop-in daycare I could book the day before.

BLOOM: Why did you decide to donate some of the proceeds to Holland Bloorview?

Amy Lockwood: I didn’t want to feel like I was making profit off something without giving something back to the community I was highlighting in my work. That was important to me. I wanted to expand my impact in every way I could. By making these toys I'm spreading inclusion, but I always wanted to help folks who are wheelchair users and in the disability community. Holland Bloorview has been incredible for my son and family. SickKids is where all the big surgeries happen, but Holland Bloorview is where the kids do the real work often. I want to honour the kids going through this. My son goes to Holland Bloorview's preschool. When he started there in September he was communicating entirely in sign but he now says five-to-seven word sentences.

BLOOM: What's been the greatest challenge of starting this business?

Amy Lockwood: Child care during a pandemic when your son is medically complex, and you can’t have anyone in your home or take him anywhere. But we're all dealing with that.

I think setting things up to be accessible for me has been the most complicated thing. I spent about two months on the design, cutting shapes out of cardboard and putting things together. I have a hard time holding a pen or anything small, so all the parts need to be big enough that I can hold them easily which really helps in the design for little hands that don’t have the same dexterity as an able-bodied adult. It needs to be inclusive for the recipient and creator.

Amy Lockwood: The interest and willingness of people to purchase these toys has been incredible. When I was working in television, I was met with so much pushback to including children with disabilities. I was excited to see that most of my customers have able-bodied children. Sometimes people describe my toys as being for kids with disabilities but they're not—they're toys, and they are toys for children. I love seeing able-bodied kids interacting with these toys and learning about different bodies and the way different people do different things—and how that’s cool and fun and wheelchairs are awesome and fast.

I think my biggest joy has been twofold: the willingness of parents to buy these toys for their children and the children themselves engaging with them and loving them. People send me photos of their kid putting a dinosaur on the wheelchair because the dinosaur hurt their leg. Or the dinosaur gets really tired and needs to go in the wheelchair. These concepts are being taught to kids through their play and imagination.

BLOOM: I noticed you have one other toy?

Amy Lockwood: It’s a take on the classic wooden rainbows that are in a lot of Waldorf and Montessori classrooms. I’m interested in open-ended play toys that don’t have a specific purpose and can be used in lots of different ways, depending on the kids' or adults' imaginations.

The ones I make out of maple are safe for mouthing. You can chew on them and throw them and they won't splinter. I sand them down so they're as smooth as butter and I seal them with FDA-approved mineral oil that is safe for hands and mouths.

I wanted to make something functional and also beautiful that a child could interact with from birth until adulthood, when they might have it sitting on their mantelpiece as a piece of decor.

BLOOM: Do you have anything new in the works?

Amy Lockwood: I'm toying with the idea, pun intended, of making some very simple wooden zebras for rare disease awareness. Wooden horses were one of the first toys discovered. They're one of the oldest toys we've found. I like the idea of putting a modern spin on that and infusing some meaning into it.

Lockwood toys are available at www.thelockwood.ca and on Instagram @the.lockwood . 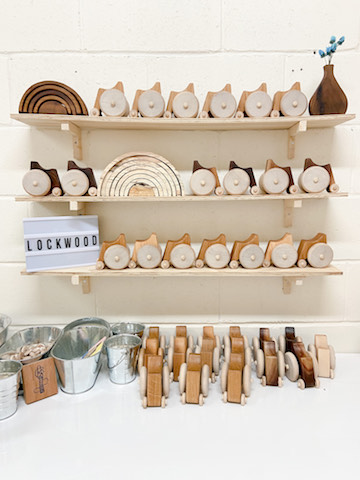