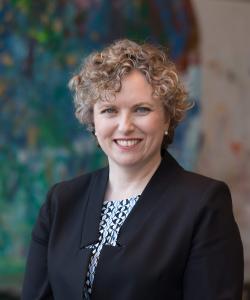 Julia Hanigsberg joined Holland Bloorview Kids Rehabilitation Hospital as its President and CEO on January 12, 2015. She has spent her career in government, post-secondary education and healthcare  as a champion for cultural transformation,  innovation, excellence and social justice.

Prior to joining Holland Bloorview Julia spent 9 years at Ryerson University, first as General Counsel and Secretary of the Board of Governors and then as Vice-President, Administration and Finance during a pivotal time of evolution including the development of the DMZ (a global leader in university-based entrepreneurship), the transformation of the former Maple Leaf Gardens into the Mattamy Athletic Centre, the development of Ryerson’s gateway on Yonge Street—the Sheldon and Tracy Levy Student Learning Centre—and the People First strategy through which she established the university’s inaugural lead for diversity, equity and inclusion. She was also interim Dean of the G. Raymond Chang School of Continuing Education where she championed digital education and access to university for marginalized students.

Julia honed her expertise in public policy during her time with the Ontario government including roles as Counsel to the Deputy Attorney General, Counsel and Special Advisor to two Secretaries of Cabinet and Chief of Staff to the Attorney General of Ontario.

A lawyer by training Julia has law degrees from McGill University and the Columbia Law School and following graduation from law school clerked at the Supreme Court of Canada. She has held Social Sciences and Humanities Research Council of Canada and Fulbright Fellowships. In 2019 she was named one of Canada's Top 100 most Powerful Women.

Julia has served on numerous volunteer boards and currently she is the Chair of the Council of Academic Hospitals of Ontario, and on the boards of the Holland Bloorview Kids Rehabilitation Hospital Foundation, the Kids Health Alliance, Children’s Healthcare Canada, Kids Brain Health Network, and the Solutions for Kids in Pain network. In addition, she serves on the CEO Committee of the Toronto Academic Health Science Network, the Executive Advisory Board of FIRST Robotics Canada, and the McGill University Women, Leadership and Philanthropy committee.